An Excellent Education For A Life of Christ-Centered Service

We understand you want to set your child up to thrive in all areas of their life, and the school they attend plays a large part in that. Deciding which school your child should attend is a tough decision, and you could be concerned that if you don’t find the right school, your child will not get the foundation they need to navigate life as a believer. If you’re like most parents, you’ve probably wrestled with deciding which school has the curriculum and community that will be the best fit for your family. You’ve likely wondered if there was a Christian school that will educate your child – body, mind, and spirit – from a Biblical perspective. At Calvin Christian School, we get it! As parents, we understand you want to be confident about the school where your child will grow up. For almost 60 years, Calvin Christian School has been home to thousands of families who value strong academics in an environment of authentic faith.

Calvin Christian School is located in northern Escondido, just a mile and a half from both I-15 and CA-78. Our campus stretches across 25 acres and boasts over 30 classrooms, a state-of-the-art performing arts building, a gymnasium, several large playing fields, a full library, a weight-training room, and spacious courtyards.

Through Music, Drama, and Visual Arts, Calvin is committed to fully developing the creative gifts of God’s children. We offer Band in grades 5 through 12, Choir in junior high and high school, and Art from preschool through 12th grade.

Calvin Christian School’s mission is to serve the whole family!
Schedule A Tour

We Provide Our Families & Students With:

Calvin Christian School is accredited by the Western Association of Schools and Colleges. Accredited as a religious school, Calvin has received the highest level of accreditation.

WASC is one of six regional associations that accredit public and private schools, colleges, and universities in the United States. Through its review processes, WASC confirms that an institution has substantially met the Commission’s Core Commitments and Standards of Accreditation and associated Criteria for Review and, thus, possesses the resources, policies, and practices to achieve its educational goals and has provided evidence of the quality of its educational programs. Accredited institutions are also subject to the conditions established by the Commission, including its policies.

Calvin Christian School serves Christian parents and their children. Over 70 different church congregations are represented; from Lutheran, Catholic, Baptist, Presbyterian, and Reformed to many non-denominational congregations. The education at Calvin Christian comes from a Biblical perspective founded in the Reformation. The following Statement of Faith articulates the basic Biblical beliefs that form the foundation of Calvin Christian and its educational practices.

We Believe There Is Only One God...

We believe there is only one God, eternally existing in three persons: The Father, Son, and Holy Spirit. This God has revealed himself to us by His creating, preserving, and governing the universe and by the written Word of God, the Bible.

We Believe The Bible...

We believe the Bible is the only inspired, infallible, inerrant, and authoritative standard for what we believe and how we live.

We Believe Humanity Was Created In Perfection...

We believe humanity was created in perfection, but Adam and Eve, our first parents, fell into sin. Therefore, every person is born in sin and is corrupted in their spirits, thoughts, emotions, and wills. Apart from the work of God, we are spiritually helpless and dead in sin.

We Believe Jesus Christ Is The True And Eternal God...

We believe Jesus Christ is the true and eternal God. This eternal Son of God became man, died on the cross to atone for the sins of all who believe, rose bodily from the dead, ascended into heaven and sits at the right hand of God the Father. Jesus will return to earth in power and glory on the final day to judge the living and the dead. He is reigning now at God’s right hand, and He sends His Holy Spirit into the world.

We Believe In One Holy, Universal Church...

We believe in one holy, universal church founded on and affirming the teachings of the apostles.

We Believe In The Holy Spirit...

We believe in the Holy Spirit, who is eternally co-equal with the Father and the Son in power and glory. The Holy Spirit works to bring the dead to life by giving sinners the gift of faith and by enabling them to honor God in their lives. 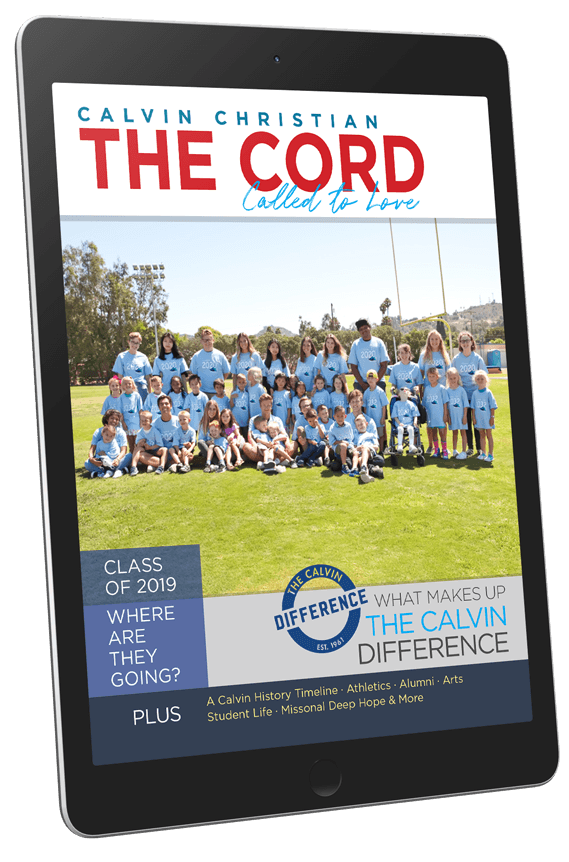 “The Cord” is a downloadable overview of the school’s Academics, Athletics, Culture, Community, and Student Life.

A cord of three strands is not only stronger than any individual strand but exponentially stronger overall. This metaphor of a “cord” could certainly be applied to God’s blessings of His church, family, and Christian school. A child is provided the greatest foundation for life when there is Christ-centered unity of these three. The annual publication of The Cord magazine for Calvin Christian School is a celebration of the fruit of this unity, as experienced from the perspective of the school, where our young ones spend the majority of their waking hours.

“Train up a child in the way he should go, and when he is old, he will not depart from it.” Proverbs 22:6

Guided by that verse and a strong commitment to Christian education, members of the Christian Reformed Church of Escondido formed a Christian school society in the late 1950s. As a result of their prayers and persistence, definite plans began to take shape. In August of 1960, the society voted to approve plans for a school building. As 1961 began, so did construction. Everyone did what they could to help. Men showed up regularly with their hammers and nail bags to donate hours of labor. Ladies in the already active “Mothers’ Club” held fundraisers. After much hard work and personal sacrifice, Calvin Christian School opened its doors on September 5, 1961. The original school building consisted of two classrooms, restrooms, an office/teachers’ lounge, and the janitor’s closet. A modest array of playground equipment stood ready and waiting as well. Calvin Christian’s early curriculum stressed the fundamentals of education and Bible teaching. Music and Athletics made up part of the school day as well. From the beginning, students received a well-rounded, quality education. Calvin Christian High School began the school year on September 8, 1980, and was officially dedicated on October 10.

John Calvin, along with Martin Luther, was a leader of the 16th-century movement that became known as the Protestant Reformation. These men and others called the church back to biblical Christianity and to an understanding of salvation in Christ alone, by grace alone, through faith alone. John Calvin was a young law student in France when he heard the message Luther had proclaimed. His conversion led him to the life of a pastor and scholar in the French-speaking city of Geneva in Switzerland until he died in 1564. John Calvin was also a school builder. He founded an academy in Geneva for the education of the young, realizing that Christians ought to be able to read and understand the Bible for themselves. He also believed people should be educated broadly and that in addition to the Bible, they should understand the world around them. Calvin himself was educated in the best traditions of the day on the Latin classics, Greek and Hebrew, Rhetoric, in short, Humanities. He believed Christians should be excellently educated so they could serve God in whatever calling was theirs. Not surprisingly, wherever the Reformation spread, literacy expanded to people of all classes.

We are Committed to Helping Your Child Thrive

We believe your student will be best set up to thrive by attending a Christian school that will educate them body, mind, and spirit – from an authentic Biblical perspective.

Calvin Christian School exists to educate students through a Biblical Worldview while holding to the highest academic standards. With the onset of Common Core, this mission remains unchanged. The Common Core Standards (CCS) for English Language Arts and Mathematics were written primarily in response to 15+ years of research trying to understand why the United States performs significantly below the average of industrialized nations in mathematics. One of the major reasons the U.S. has not been performing well is due to the standards and curriculum being less rigorous and primarily procedural based. Calvin Christian students have consistently outperformed their counterparts in public schools, as revealed on National Standardized exams. The Common Core Standards were written to prepare students for college and 21st Century Careers. Approximately 85% of Calvin Christian graduates enroll in four-year colleges and Universities immediately after high school graduation. Nearly all of the remaining 15% enroll in community colleges with the most having the intent of transferring at some point to a four-year college.

Here’s how easy it can be to find a robust academic environment that also nurtures your child’s faith:

We would love to show you around! Schedule a personal tour of our beautiful campus and learn more about our curriculum, fine arts, athletics, and spiritual life. See what life at Calvin could look like for your family.

Fill out an application to help us get to know you better! We look forward to learning more about your family through the online application, references, student assessment, and family interview.

When you enroll at Calvin, you get more than an excellent education for your child. You join a community of families who are committed to living out their faith in every part of their lives.