One such example took place last Friday in Ron Van Der Pol’s 7th grade history class. Mr. VDP, as his students affectionately call him, asked his students to tackle the following question: What critical issues do our veterans and military families currently face and what steps are being taken to remedy those issues?

Below are a few responses from his students

Finding employment when veterans get back can be very hard. There are a lot of homeless veterans and many of them could not find employment when they completed their service. Almost 20% of all veterans are unemployed. There are certain organizations out there that are hiring veterans because of tax money. The government needs to do more about this though. When the veterans return from war, if they have no family to help, the government needs to give them a temporary house to get them on their feet and help them find a job. – Wyatt K.

Our military men and women see disturbing images in battle and many times can’t get it out of their heads. Post Traumatic Stress Disorder is very bad and affects many veterans after war. To help cope with PTSD there are some techniques that may help like taking time to relax with relaxation techniques such as massage, meditation, prayer, or yoga. Those who suffer PTSD should avoid alcohol and drugs because it can be tempting to turn to drugs and alcohol. But substance abuse can make the symptoms of PTSD worse. People need to also help them. – Peyton O.

Many veterans have both benefits and issues of coming back home to family. Some have health issues when coming back. Some families get free tuition, retirement benefits, medical insurance, recognition, and commissaries which provide cheaper prices for items. In foreign countries families can be stationed on a military base with other military families instead of a random neighborhood. Also there are groups to help vets cope with PTSD and other issues. I feel there should be more done for our military people because some of them are homeless and some people don't respect them. – Lily R. 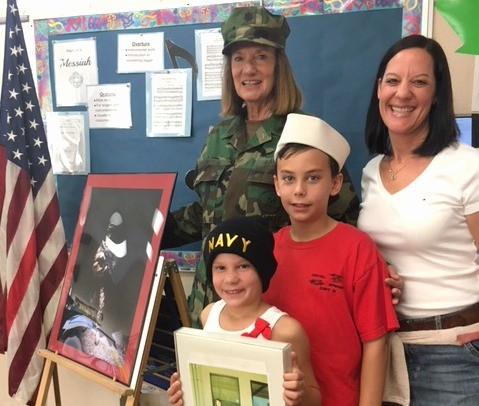 In addition to conversations like these in junior high and high school, our Elementary students learned about Veterans Day in a special chapel. Special guest, Ann Thompson-Muslin, USN CEC CDR (ret), spoke about all the different people in the military and government that help support a warrior as he/she prepares to be deployed. She talked about various jobs that play an important role like: the Commander in Chief, Intelligence Officer, Supply Officer, Medical Officer, and Chaplain and how they support the warrior. She ended with emphasizing SERVICE and how all of the jobs in the military are based on serving others. She strongly encouraged every student to be a servant in their community and to give thanks when they see military personnel.